Developing models for sustainable hunting as a conservation tool

Yes, the situation is pretty bleak and scary; lions have now declined in many parts of Africa 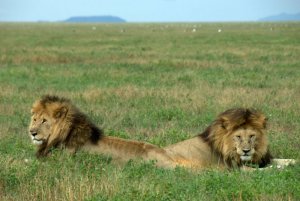 and a recent study in PLoSOne showed that lions only occupy 25% of their historic range. BBC reports “Lions facing extinction in West Africa” with similar headlines in The Independent and the Daily Mail. It is worth pointing out that the PloSOne paper found that the total operating budget and budget per km2 of a protected area was positively correlated to lion persistence, indicating that shortage of money is a major problem for protected areas in Africa. Most people would probably agree that it would be good to provide more money for conservation of charismatic mega-fauna and biodiversity as a whole.

And yet it seems as if such stories happen in isolation and are not part of the same challenge. Recently, there was much protest and outrage about an auction in Texas that raised $350,000 (£214,000) to hunt a black rhino in Namibia. For example, the BBC, The Independent and National Geographic now report that the person who won the licence has received death threats. However, there are also other voices and the one I personally liked most because it was clear and rationale was a statement by Dr Bob Smith, a senior research fellow at the Durrell Institute of Wildlife and Ecology (Dice), University of Kent who said on wired.co.uk that it was “perfectly reasonable” to sell rhino trophies as part of raising funds for conservation projects and that “countries like South Africa and Namibia have been incredibly successful at conserving their rhino populations by following exactly this policy.” On many occasions, the Namibian government has clarified that the annual quota is three rhinos and these are chosen to be of non-productive age. Black rhino numbers have increased from 2,400 in 1995 to 5,000 today, mostly in Namibia and South Africa according to wired.co.uk.

It is worth pointing out that conservation science has been developing into a scientific discipline that can contribute to answering some of the sustainable use challenges. For example, our recent paper in PNAS (and covered at the Smithsonian.com), where we developed a new model to set sustainable lion trophy hunting quotas when population size is unknown, will hopefully be implemented across Africa and contribute to sustainable conservation and management not only for lions but for their prey and overall biodiversity. The idea behind our method is that the time it takes to find and kill a male lion is related to lion abundance in a given area. We also confirm earlier studies that it is more sustainable to kill old males (6 years and older), but show that our method is robust to some degree of uncertainty of estimating the age of a male lion in the field. This may also have direct links to the rhino case where the aim is to take old males that are beyond their reproductive age.

Conservationists, managers and scientists often call for more and better data and that no action can be taken or allowed until we have this extensive and high quality data. However, more research is needed into using the data that we already have available or that is easy and relatively inexpensive to collect. For example, time to find and kill a lion is most likely available or relatively inexpensive to collect from the length of hunting trips/visits by clients. These records are already kept or can be collected in most places that have lion hunting.

Next to the moral and ethical discussion that is much needed, there is also a need to invest more into research and scientific approaches that can help stakeholders, managers and conservationists to make informed and evidence based decisions. For this we need to develop approaches that can use data that is inexpensive and feasible to collect where funds are limited.

← With so many people to feed, should we go back to the wild?
Power to the plants: how they’re influencing conservation policy and industry in Uzbekistan →