Stories of the forest: I

I am two weeks into a five-week stay at  Lopé National Park, Gabon. This is the first field trip of my PhD and I am here to meet the SEGC team and observe and learn about methodology that has been used over the last 30 years to collect the tree phenology data I will be analysing over the next few months. Firstly, Lopé is beautiful. It feels like a real privilege to be here, even for just a few weeks. The study station is a 12km drive from the nearest village in the middle of a truly un-hunted patch of forest and savanna. We regularly look up from breakfast to see or hear buffalo, elephant, duiker, colobus, parrots, mandrills (the list goes on…) just going about their business in front of us.

And it’s not only the animals which are exciting. In fact for me it’s the plants which are really blowing my mind (much to the confusion of the other researchers here…Example of me in the forest: “That’s a black colobus monkey up there? Lovely, but have you seen this Ochnaceae plant with the crazy glandular floral disk?”). So to try and convey this excitement I would like to introduce you to the Mebimengone tree (Omphalocarpum procerum). It is a member of the Sapotaceae family, which as I learned just two weeks ago, at the Kew Tropical Plant ID course, have simple, entire leaves, often arranged in whorls, a sticky white sap when cut, a fleshy berry-like fruit with shiny seeds and are found throughout the tropics in lowland and lower montane rain forests.

The Mebimengone tree I found in the forest was very striking. It had a swollen and damaged trunk…

…and large fruits (up to 2kg weight and 20cm diameter) which were ripening directly off the main trunk well under the canopy (a phenomenon called cauliflory).

Looking around the base of this particular tree it became apparent that the vegetation was disturbed, that something big had been there recently, and this big thing had been eating the enormous fruits of this tree. 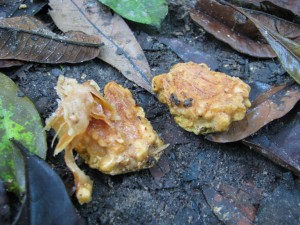 Something big enough and strong enough to crack the hard fruit case and break up the pulp inside. Something which also tends to leave enormous dung piles behind…

It was of course the African forest elephant (Loxodonta africana cyclotis). 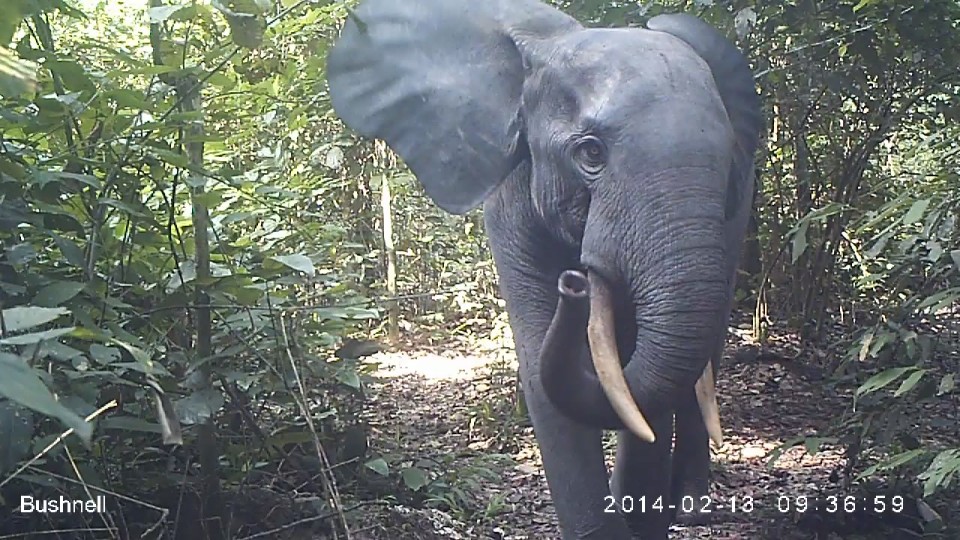 This fairly simple story of endozoochory (seed dispersal via an animal gut) has absolutely fascinated me. 70% of the trees in Lopé National Park rely on animals for dispersal of their seeds, so it is far from common. But is the specificity of this situation which impressed itself on me – one tree species relying entirely on one animal species to reproduce effectively. The tree is so well adapted for elephant dispersal that it produces hard nodules in the flesh of the fruit which appear to prevent the elephant from grinding it’s teeth together and so destroying the seed. Instead the elephant swallows the pulp with the seeds and deposits them in a rich dung heap ready for germination.

To emphasise the exclusivity and therefore importance of this relationship, in parts of Africa where forest elephants have been made locally extinct, the Mebimengone fruits rot on the ground and there is no natural reproduction of the species.

I’m excited to spend the next few years studying the phenology behind these intricate relationships and contribute to the understanding of this forest and it’s resilience in the face of a changing climate.

And in case one photo of the abundant charismatic megafauna around here wasn’t enough (look away plant biologists), here is a photo of a little family I spotted last week:

← A short history on the luck, failings and success of field work
Brazilian research visas: a “how to?” get through the paperwork minefield and get into the field →