Birds and bushmeat in Cameroon

I recently published an article in the journal Oryx, my first in a mainstream conservation journal. As pleased as I am to see the results of our team’s hard work finally published, it’s made me think about my future research aims and priorities. You can download the paper here.

The study came about through some incidental observations I made when working as a Research Associate with the Ebo Forest Research Project (EFRP) in Cameroon. I periodically came across the remains of dead birds like hornbills and eagles in hunter’s camps, but knew that birds were generally considered to be unaffected by the ‘bushmeat’ trade in Cameroon, so this seemed odd. Zacharie, my colleague and a former hunter, suggested that hunters had eaten the birds and they had no real commercial value. We began to wonder if previous research into the bushmeat trade had overlooked this aspect of hunter behaviour, since most studies had examined carcasses traded in markets or consumed in villages. To investigate further, we decided to undertake a year-long study, recording all animal remains discarded by hunters in a sample of camps. 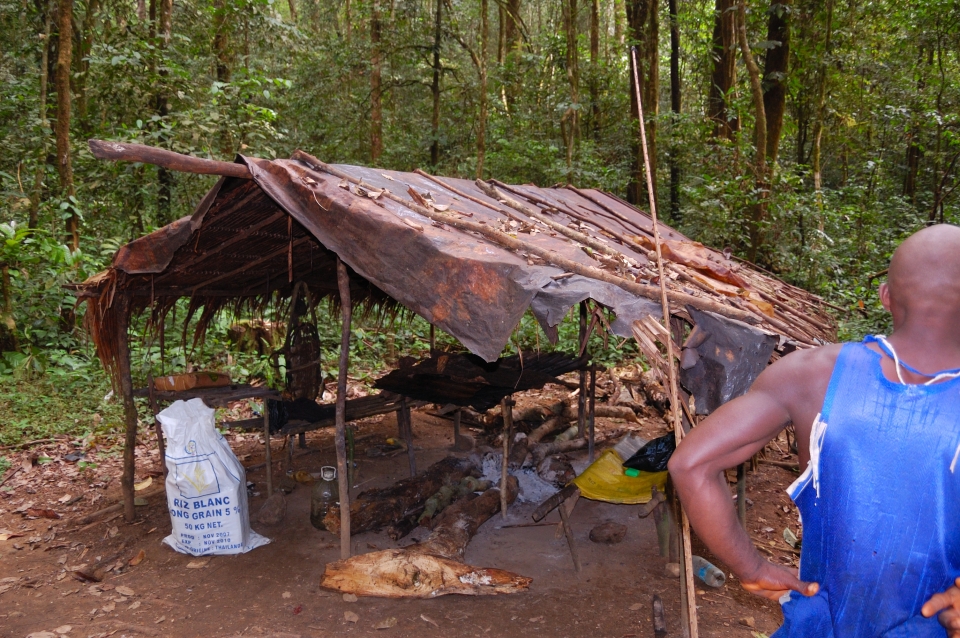 In principle this sounds quite simple, but most hunting activity in the Ebo forest is illegal (particularly using guns), and hunters are not famous for their hospitality. It was also going to be costly, since travelling between villages around the Ebo forest is expensive without a dedicated 4×4, which I couldn’t afford. It took me three years of repeated grant applications and rejections before I eventually had a run of good luck and received a total of $5,000 from three funders (The Peregrine Fund, British Ecological Society & Raptor Research Foundation). At the time it felt like a lottery win and, with some logistical support from the EFRP, I had visions of surveying all 34 known hunting camps in the Ebo forest every month for a year. This was of course optimistic, and by the time the funds actually made it to the project’s bank account I was no longer based in Cameroon. This wasn’t a major problem, since I had already developed the methodology with Zacharie and he was ready to undertake the surveys independently.

The study got off to a slow start, as Zacharie had to to hold meetings with each of the potential study villages before attempting to visit the camps. This involved protracted meetings with hunters and village chiefs, and after several weeks of negotiations he eventually persuaded hunters from two villages to cooperate. We were very fortunate to have Zacharie’s negotiating skills, and in the end we were allowed access to 13 of the 34 known hunting camps.

Zacharie went on to do a great job, even in the face of major transport difficulties. The local motorbike taxis, often the only means of transport into and out of a village, frequently refused to carry him because they could make more money transporting sacks of bushmeat. He eventually completed 50 surveys and photographed the remains of 49 animals from 21 species. As expected, we found that birds comprised the highest proportion of animal remains discarded in hunting camps. Raptors and hornbills made up the majority of carcasses, and there were also a few mammals. Perhaps the most striking result was that the most frequently detected bird, the white-thighed hornbill Bycanistes albotibialis, had never been recorded by previous bushmeat surveys in the region, which had examined some 250,000 carcasses. 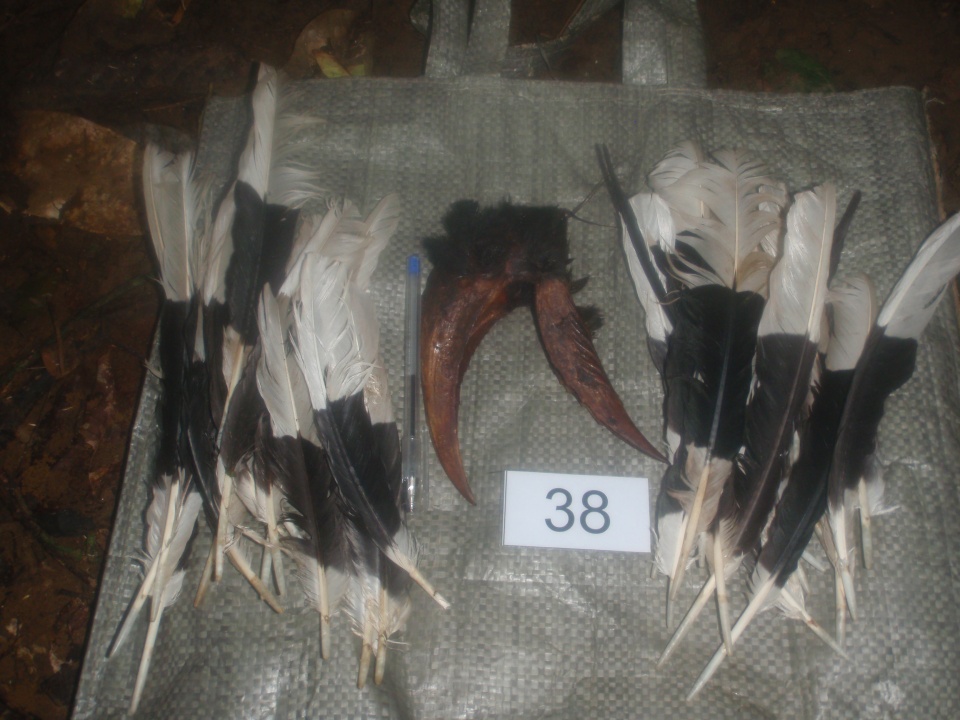 From a conservation perspective, our results suggest that large-bodied birds may be experiencing unsustainable hunting pressure in the Ebo forest, and it’s likely that the same is happening elsewhere in Central Africa. Much of the interest in the bushmeat trade has focused on large mammals, which are highly vulnerable to excessive hunting pressure. Our study suggests that there is also a real need for future research to look at the impact of hunting on bird populations, particularly raptors. The crowned eagle Stephanoaetus coronatus, for example, reproduces very slowly and a monogamous pair produces just one offspring biennially. They also prey on species hunted for bushmeat, such as colobus monkeys, guenons and duiker, therefore competing directly with humans for food. We didn’t record any dead crowned eagles during the study, but I’ve previously found remains in hunting camps. It’s likely that crowned eagle populations in Central Africa have already experienced population declines, and the species was recently listed as Near Threatened by the IUCN Red-List of Endangered Species. 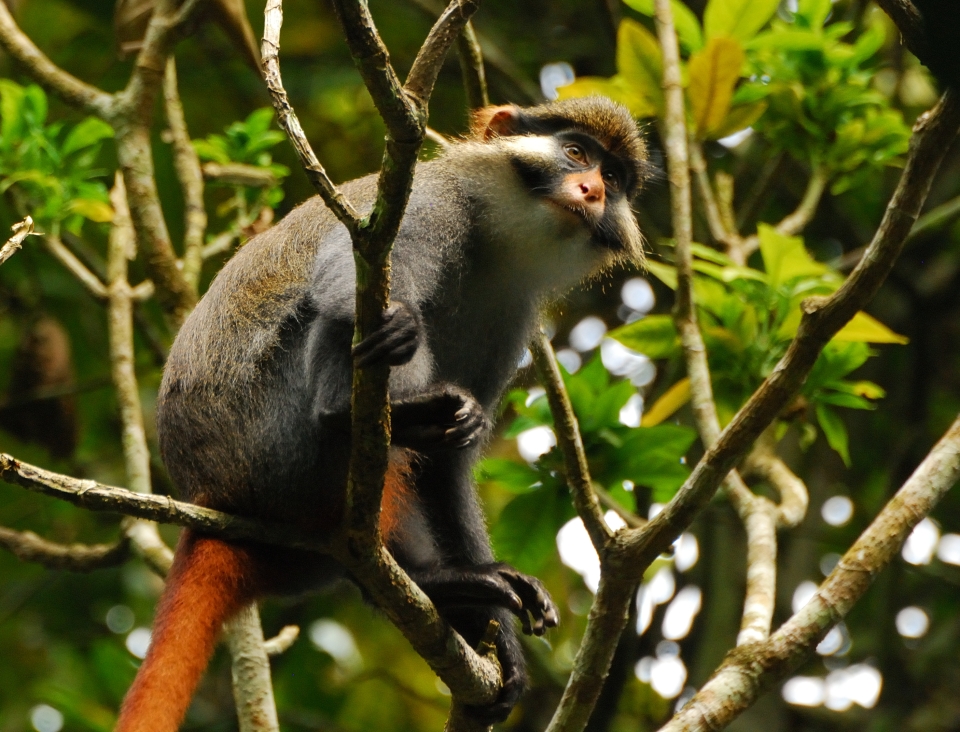 Although I’m pleased with the outcome of the study, I can’t help but wonder if the time and resources expended might have been better used. It’s clear that excessive hunting is not only bad for those species affected directly, but also for wider ecosystems and people. Perhaps it’s time to just acknowledge this and stop attempting to quantify the bushmeat trade, instead dedicating resources to finding practical solutions. This is why socioeconomic studies have become central to much of the conservation research conducted in Central Africa. However, in Cameroon at least, results from these studies have yet to have any serious impact on wildlife legislation, people’s behaviour or lifestyles. I think this will change, and in the meantime conservation NGOs like the EFRP can be very effective at damage control, even if they can’t completely stop illegal hunting activities.

While I wonder about the value of using limited resources to simply quantify a tiny part of an otherwise well-known conservation problem, I hope that Zacharie’s fieldwork had a positive impact. He and other hunters working with the EFRP are well known in the community for abandoning hunting and using their skills to work in conservation. I expect that some of the active hunters he worked with are inspired by this, and might even apply for a job when the next round of field assistant posts are advertised. There’s a phrase in Cameroon’s pidgin English along the lines of “Small small take banana catch monkey”, meaning little by little you’ll get what you want. Conservation in Cameroon works along the same lines, and little by little hunters might start to look for alternative lifestyles if they can be convinced there are better alternatives. 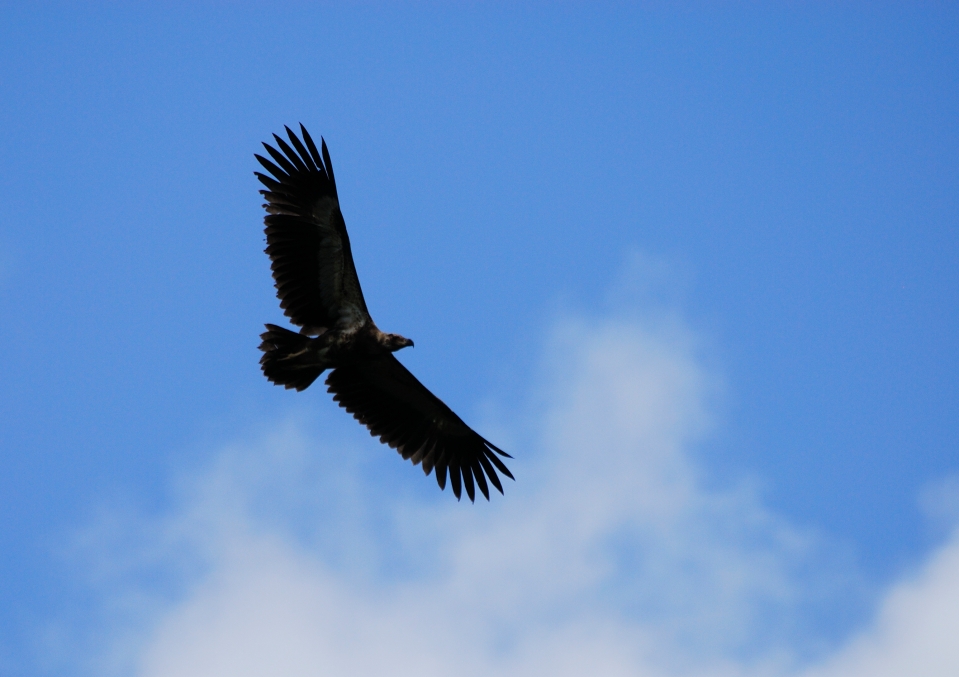