My PhD fieldwork days have come to an end and on reflection I can now appreciate how much was achieved, both good and challenging, in such a short time frame. So much happens during a field season but only the successes make it into scientific literature. For me, the gritty details and mistakes that get left behind make field work experience so much more memorable and allow you to improve for the future. I often read stories of perfect, idyllic fieldwork settings and experiments, which is fantastic, but conversely I would also encourage people to share not only the reality of setting up a field experiment, but also their fieldwork ‘bloopers’.  Although urban rivers may not seem exotic, I can definitely say that I never expected them to be so entertaining. These are just a few of my PhD fieldwork blips. 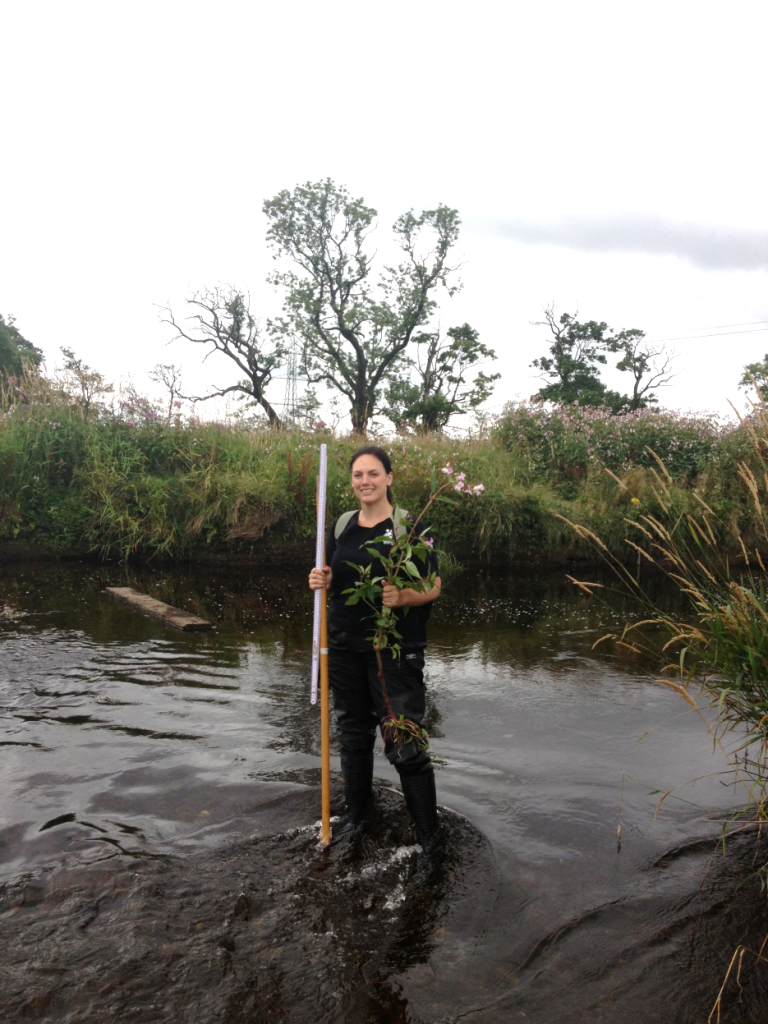 Wading through the River Gryfe with a Himalayan balsam plant in tow.

I had always thought of myself as a resourceful person. Give me a problem, I’ll ‘make a plan’ (a very South African turn of phrase).  However, having just passed my driving test and moved to Scotland, with no experience of working along rivers, or knowledge of what I was looking for, I just panicked. Now, I did have a few crucial criteria to aim for, some being:  make sure I can walk at least 500 metres along the most downstream end of a river, which must be invaded by the invasive plant Himalayan balsam (Impatiens glandulifera). This plant is tall, with bright pink, pungent flowers and I soon became a dab hand at spotting it whilst driving anywhere near a river and, on parking the car, smelling it. After a month of google maps, google earth, broken GPSs and sat navs, I finally found the 20 rivers with 20 suitable survey sights.

All the sites were predominantly urban or alongside farm land, which came with its own suite of issues. However, when getting permission to work along my chosen river sites throughout Scotland, people were generally helpful (unless they were a farmer who thought you were testing the water quality…) and interested in the project. On one occasion we were even brought tea and cake by a landowner, who thought us standing in the rain for 10 hours was horrific (I loved it). The vegetation could reach up to 4 metres high, with stinging nettles up to 3 metres. We got used to the constant burning on our skin and kept ourselves sane by shaking the Himalayan balsam to see which of us would get an exploding seed pod in the eye.

Tea and cake provided by kind cottage Lady on the River Tweed.

When crossing the Annick Water to access a survey site, David, my field assistant, was using a 1 metre wading pole to bash back the nettles so we could climb up the bank. He stood still for a moment and then started shouting whilst trying to cross back to the other side of the river, as we were both repeatedly stung by the angry wasps whose nest he had disturbed. I wanted to dive into the water, but all I could think of was my phone in my pocket, with all the fieldwork pictures on it and all the unsightly floating objects in the river. We finally clambered up the other river bank, running back and forth until the wasps gave up.

Me: “David, where is the equipment bag?”

We looked at each other and then over to the other side of the river where the bag sat, covered in wasps. After an hour, we suited up with every bit of clothing and plastic in our possession, as well as some burning reeds, and finally retrieved the field bag. Many beers were drunk that night.

Geared up and ready to retrieve our field work equipment bag from under the angry wasps nest.

I had to revisit these sites 3 times over the next year and got to know them quite well. In early spring I had to collect the 360 30 x 30cm green AstroTurf mats which had been placed at each site the year before. After winter floods, my red spray painted wooden stakes had mostly vanished and most of the mats were covered in mounds of sediment deposition. I had tried to use a visual marker, like a telephone pole, for each transect where they were placed, measuring the distance between each mat. Sally, my field assistant, and I had a ‘mat dance’: every time we found a mat we proceeded to wave our hands in air and gyrate to the ‘Venga boys are coming’ tune…much to the dismay of many dog walkers.

Finding the AstroTurf mats, covered by mounds of sediment deposition, on the Dean Water.

On the River Almond we had to access the survey site by going down one path on a steep embankment. The river was flowing fast, but I was confident that if we worked quickly we could get the work done. We were about 50 metres from the path, measuring the distance to each mat. I asked Sally to head back to get some more bags for the soil cores and as she turned around, she let out her high pitched alarm call (scream).  The river had engulfed the bank. The bagged soil cores were starting to float down the river, along with the rucksack, which had our car keys in it. I managed to wade out (stupidly) and get the soil core bags and the rucksack (I was not losing any samples!), and we got up the bank safely. Sad to say we lost those mats, but we successfully retrieved 278 across all sites.

Trying to climb through trees and 4 metre high Himalayan balsam on the River Endrick, whilst David fights through brambles and Rose Bay Willow herb on the Black Cart Water.

Attacked by wasps, intimidated by aggressive dogs on sites located in run down areas, accused of bombing the river as a poacher, constantly being mistaken for fishermen, stung by stinging nettles, even offered to a farmer’s 21 year old son as a birthday present… I wouldn’t change a thing. Most of the time you are alone, it is peaceful and beautiful, and you get used to the sickly sweet smell of Himalayan balsam. The bad experiences make the best stories. And there is nothing quite like being in the field.

Thanks to Alan Law for revealing his fieldwork methods in ‘A short history on the luck, failings and success of field work’, as well as the blog ‘Dispatches in the field’ which has great real life fieldwork anecdotes for all to enjoy and sympathise with!

← Free wine and big data…
A bat in the hand is worth two in the bush: using capture data to assess how our commonest bat species are using urban areas →