Managing conservation conflict with a Pie and a Pint

I’m sitting down to write this shortly after the UK General Election result, which has surprised many. Your surprise may be positive or negative but if you’re Nick Clegg you may well be pondering if your five years of cooperation with David Cameron’s Conservatives turned out so well after all. I don’t think the electorate thought so.

Modern conservation of biodiversity relies on elected policymakers and professional civil servants cooperating with each other and with a plethora of stakeholder groups and experts from various fields. Personal ideological differences as well as those in background, employment, life experience, language etc. etc. can often be overcome or even embraced to get conservation work done. However, where there is strong disagreement about conservation objectives coupled with a perception of some groups acting to assert interests at the expense of others, there is conservation conflict. Conservation conflict is on the rise and offers a significant threat to conservation efforts throughout the world.

The importance of the issue meant the British Ecological Society Scottish Policy Group became interested in conservation conflict as a discussion topic for their informal meeting series ‘Pie and a Pint.’ The perfect antidote to dry lectures and formal meetings, Pie and a Pint brings ecologists, politicians, civil servants and other specialists together twice a year to discuss a different single theme relevant to both ecology and policy. With a pie. And a pint.

I organised the Pie and a Pint event at last Wednesday’s (5th May 2015) meeting in Edinburgh’s Summerhall with supervisors Nils Bunnefeld and Aidan Keane (Steve Redpath remotely) in tow. The aim was to initiate a discussion on conservation conflict in Scotland and how we can try to understand and manage it for the betterment of both stakeholders and biodiversity. How did we do this? Well we got everyone in a circle, told them to imagine being land owners and asked them if they would like to either farm sheep or enter a fictitious rewilding project. At one point I threw a die.

In my research I am just starting to use game theory to study conservation conflict. Tools from game theory, the study of strategic decision making, can help investigate how people will act and react in a competitive environment. As such they have been touted for use in conservation conflict situations. This could be to select a solution most acceptable to conflicting parties or to predict the reaction of various stakeholder groups to potential management strategies. Experiments can take the form of playing fairly simple controlled games to see how subjects make decisions and react to the decisions of others.

The game we played got our mixed crowd of ecologists, civil servants, economists and mathematicians into teams to play at being land owning families. The family had a set number of land units which they could use to either farm sheep or enter into a rewilding project. They received points based on their choices: sheep farming produced a lower but guaranteed payoff; the rewilding project could provide higher rewards but relied on the action of all the groups together, not just an individual team. If collectively, the teams didn’t reach a threshold of land allocated to sheep farming, then a penalty would be incurred.

We played a total of eight rounds of the game, with the ‘family’ teams deciding how much of their land to put into either the sheep farming or rewilding before each round. These decisions were not shared between the teams. Points were calculated and passed back to teams confidentially, with the mean score from all teams written up on a flip chart. Everyone could then see how they were doing versus the average.

Once we were out of time, we tallied up all the points and discussed why the teams had chosen their particular strategy.

One of the main features to appear during the discussion was that of resentment. Luckily it had quickly dissipated following the end of the game and everyone was positively interested in why and how they had all played the way they did. Some teams felt that they were alone in scoring below average, even though this was not the case. Others felt torn between playing the game to achieve the most points and choosing an option which represented them in the narrative of the game – sheep farming or rewilding – but which didn’t offer such a high payoff. The former feeling resentment towards the other teams whom they (incorrectly) thought were performing ahead of them. The latter resenting others who could accrue more points without seemingly have to choose between their points tally and a narrative role.

We managed to produce resentment (albeit a smiley version!) between a very nice bunch of fairly like-minded people in about an hour and half. Imagine the deep level of such feeling if it was your livelihood being threatened, consistently and over a number of years.

The Pie and a Pint evening game was a fun way to discuss conservation conflict with a varied audience rather than being a game designed to extract hard data. The next step in our research is to design a game to be played with people actually involved in conservation conflict situations. Using games we will encourage stakeholders to reveal, through play and discussion, information about decision making processes. We (both researchers and stakeholders) can then use such insights to determine the best ways of increasing cooperation between conflicting groups.

David Cameron no longer has to rely on cooperation with a group so apparently different in ideology in order to govern the country. In biodiversity conservation however, we must find new tools (or new ways of using existing tools) to help those with very different viewpoints move forward and to meet conservation objectives. 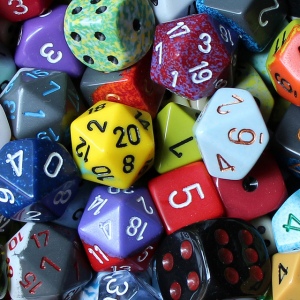