Author’s note: This is a reposting from my blog malloc(evol_ecol); the post introduces the GMSE R package as part of the ConFooBio project.

As part of the ConFooBio project at the University of Stirling, my colleagues and I have released the new R package GMSE, with v0.2.2.7 currently available on CRAN and GitHub. The GMSE package generalises management strategy evaluation (MSE), an adaptive management framework that incorporates social-ecological system dynamics, the process of observing and monitoring the social-ecological system, and the assessment and decision-making processes of managers (Bunnefeld, Hoshino, and Milner-Gulland 2011). Our generalisation includes a game-theoretic component in which both managers and stakeholders dynamically update their decision-making to maximise their own utilities. The GMSE package thereby simulates all aspects of MSE and uses genetic algorithms (Hamblin 2013) to find adaptive solutions for manager and stakeholder decision-making.

In keeping with the MSE approach (Bunnefeld, Hoshino, and Milner-Gulland 2011), GMSE does not attempt to find optimal strategies or solutions for management. Instead, genetic algorithms within the GMSE package find manager policies and stakeholder actions that are adaptive, meaning that policies and actions that are found reflect heuristic strategies of managers and stakeholders that are adopted within a set of constraints and potentially changing circumstances. A wide range of parameter values can be specified by the software user to simulate management (for a full list, see the available arguments to the gmse() function in the reference manual, or run help(gmse) after loading the GMSE package). The gmse() function simulates all aspects of management, including the natural resources (population) model, the process by which resources are sampled or observed, the process by which managers make decisions about policy, and the process by which stakeholders decide how to act in response to policy (see Figure 1 below). The latter two processes (upper left and right boxes in Figure 1, respectively) each call the genetic algorithm to find adaptive solutions in each time step. 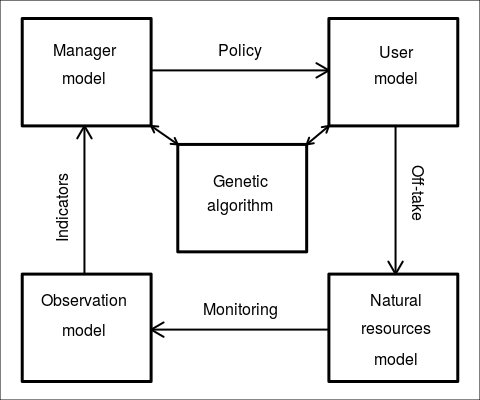 All sub-models (boxes in Figure 1) are individual-based (i.e., agent-based). The natural resources model simulates a single time step of resources (e.g., a managed population) that can undergo movement, reproduction, and death. The observation model simulates the monitoring of the resources (e.g., through capture-mark-recapture techniques). The manager model uses data from the observation model to set policy for stakeholders (e.g., how costly culling, scaring, or feeding resources should be), and the user model uses manager policy to determine actions to maximise their own utilities.

The GMSE package can be installed from CRAN or GitHub. The easiest way to install is through CRAN using the install.packages() function in R (Note, R version 3.3.3 or higher is required for GMSE).

To install this package from GitHub, the devtools library first needs to be installed.

Use install_github() to install using devtools.

A simple example illustrates the use of GMSE below.

A hunted population under management

Consider a population of managed resources that is hunted by four stakeholders (GMSE allows for any number of stakeholders; the default number is four to keep things simple). Assume that the population has a carrying capacity of res_death_K = 600 adults, and the manager wants to keep the population at manage_target = 400 individuals. The manager will use a capture-mark-recapture method of monitoring the population in each time step (observe_type = 1). Further assume that all other parameter values are set to default values (see the reference manual). We can run this scenario using the code below.

To avoid automatic plotting, I have set plotting = FALSE. The output to sim is a very large data structure that includes output from each sub-model (natural resource, observation, manager, and user) in each of 100 (default) time steps. The results can be plotted using the plot_gmse_results function. 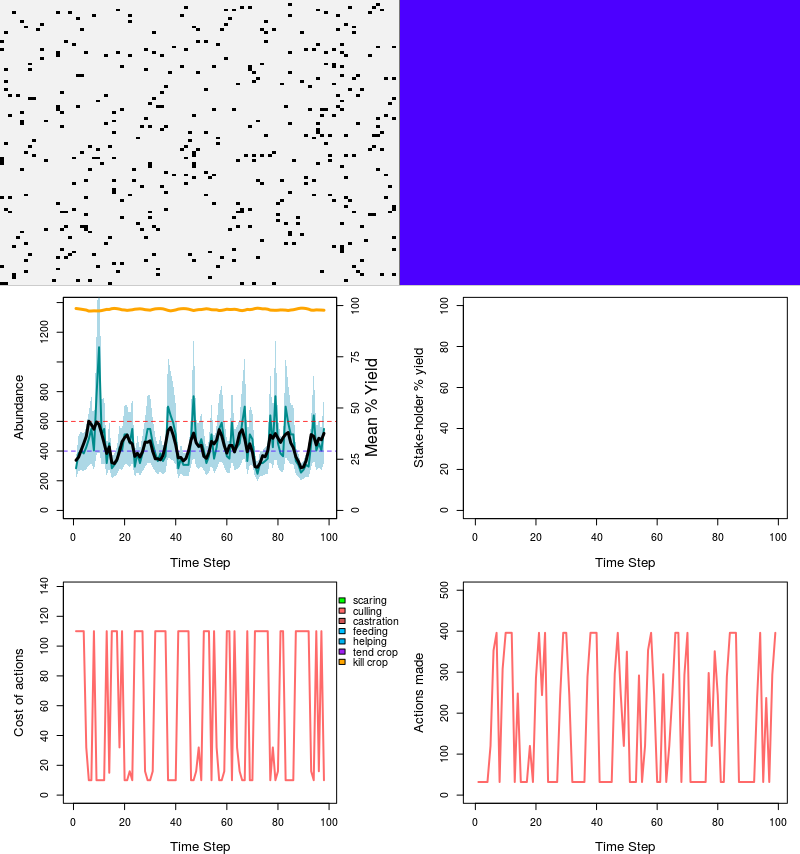 Figure 2 above shows the simulation dynamics over time for the starting parameter values set in sim. The upper left panel of the plot shows the positions of resources on the simulated landscape in the last time step (had we set plotting = TRUE, the movement of resources over time would be observable). The upper right panel is entirely blue, representing public land that is not owned by stakeholders (to simulate stakeholders that own land and attempt to maximise land values — e.g., crop yield –, use the option land_ownership = TRUE. Land ownership will then be represented by different landscape colours).

The middle left plot shows how both actual and estimated resource abundance changes over time. The solid black line illustrates the actual abundance of resources (i.e., the number of individuals) alive in each time step; the solid blue line illustrates how many resources are estimated based on the observation model and the simulated mark-recapture technique of the manager (blue shading illustrates 95 percent confidence intervals, but these are for display only and are not used in manager decision-making). The black dotted line identifies the management target (manage_target = 400), and the red dotted line illustrates the population carrying capacity (res_death_K = 600); note
that carrying capacity is enacted on adult mortality (but see also res_birth_K), so abundance can increase over carrying capacity given a sufficient number of juvenile and adult resources (where juveniles are defined as individuals born in the same time step as the current time step). The orange line shows the mean percent yield (right axis) of landscape production, which may be decreased by resources if resources consume crops on the landscape (see res_consume). The middle right panel would show the percent yield of each individual stakeholder’s given land_ownership = TRUE, with solid line colours reflecting yield from identically coloured plots in the upper right panel.

The lower left and right plots show manager policy and stakeholder actions over time, respectively. Under default simulation parameter values, only culling is available as a management policy and a stakeholder action, but (as indicated by the legend) other policy options can be set, including any combination of the following: scaring (moving resources), culling (killing resources), castration (removing resource’s ability to reproduce), feeding (increasing a resource’s survival probability), helping (increasing a resource’s reproduction), tend crop (increasing the yield from landscape cells), and kill crop (destroying yield of a landscape cell). Managers create policy by setting the cost of stakeholders performing available actions on resources (i.e., all actions except tending and killing crops), as constrained by the manger’s budget (manager_budget) and a minimum cost of performing actions (minimum_cost). In the above plot, there are time steps in which the manager has set culling costs to be high or low, based on the degree to which the estimated abundance of the population (blue line in middle left panel) is above or below the manager’s target. In response, stakeholders (in this case hunters) cull a lot when the manager sets culling to be cheap, but very little when culling costs are set to be high (‘costs’ in this case might be interpreted as quotas, or as strongly enforced prohibitions if the cost of culling is higher than the stakeholders budget, user_budget).

The gmse() function thereby provides a method of simulating multiple aspects of population management. This simple example is only one of many possible scenarios that can be simulated.

The code underlying GMSE has been flexibly developed for future expansion and new features. If there is something that would be useful to add that does not appear to be available by setting parameter values in gmse(), then chances are it can already be done by a few tweaks to the source code, or would require only a bit of additional coding. For example, the code already allows for future expansions to any number of resource types, allowing for multiple populations and structured populations — this is also true for agents.

A wiki can be found in the GMSE GitHub repository, and there is a place to post issues, including suggestions for new features. 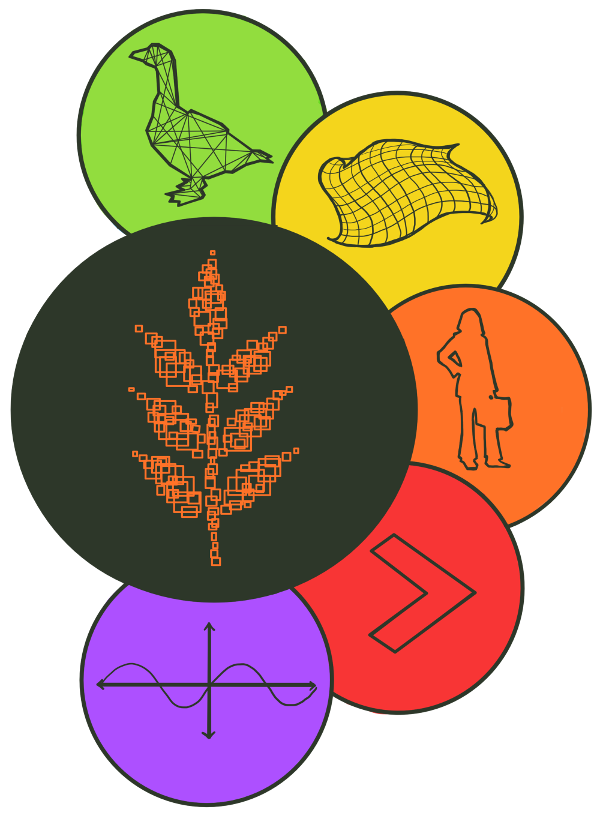 ← The Conservation Conversation: What type of conservationist are you?
Wicked Conflicts →