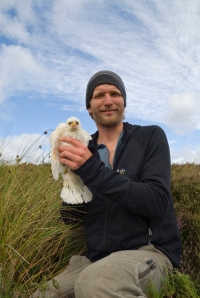 Ecology and conservation of urban bats

Although urbanisation by expanding human populations can reduce native biological diversity by reducing the amount and quality of habitat available for wildlife, green spaces (e.g. parks, gardens) within urban areas can hold relatively rich wildlife communities. Previous studies have highlighted the importance of green space to human health and well-being as well as wildlife conservation and the issue of urban biodiversity is moving up political and environmental agendas. Urban areas are important for wildlife, however, they are often threatened by development.  Understanding how different species use urban environments and how habitat management and urban planning can promote population persistence is therefore critical to their conservation.

Many bat species in Europe have undergone large population declines during the 20th century, and the expansion of urban development is thought to be a contributory factor. The impact of urbanisation appears to vary between bats, for example, Pipistrellus spp. are thought to be relatively well adapted to urbanisation, while Myotis spp. are not. There is currently relatively little information on bat ecology within British urban areas; during my PhD I will be looking at a variety of research topics including:

An explanation of the factors that may determine bat diversity, bat activity, and bat abundance within fragmented urban

woodland throughout Central Scotland. This study will determine how bat usage within fragmented urban woodland is influenced by woodland characteristics such as tree species richness, woodland clutter, and woodland size. I will also examine the influence of the surrounding urban matrix by looking at the influence of landscape metrics such as woodland patch configuration, habitat diversity, and connectivity on bat activity and abundance. I will also examine sexual differences in foraging behaviour and habitat selection in P. pygmaeus.

A study of how bats exploit urban waterways (rivers and canals) throughout Britain.My research will look at how bat

species across a range of habitats. Since 1996 more than 3,000 volunteers have undertaken surveys at over 5,800 roost or field sites throughout the UK. Using this data we will examine differential responses to urbanisation between P. pygmaeus and P. pipistrellus at a landscape scale. Using geographic information systems (GIS) we will explore the response of pipistrelle bats to landscape configuration and habitat fragmentation. Results may form the basis of management plans to optimise habitats for particular species or to identify the extent to which urban landscapes are detrimental to pipistrelle populations.