With so many people to feed, should we go back to the wild?

Posted on December 18, 2013 By Laura Kubasiewicz 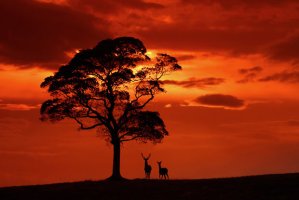 When I first decided to write a blog post about the conservation benefits of eating wild food, venison was the first thing that sprang to mind. With no natural predators remaining to keep populations in check, deer numbers are currently estimated at around 1.5m, more than any other time on record. This imbalance with the rest of the ecosystem leads to the overgrazing of young tree seedlings, particularly broadleaves, preventing forest regeneration and reducing biodiversity. Peat bogs, a valuable carbon sink, can also be irreparably damaged by trampling. The absence of predators to naturally control deer numbers is also used as justification for human intervention. Around 20% of deer are culled throughout the UK every year, although recent reports suggest that this is not enough and at least 50% need to be shot to give any hope of controlling the population (although this figure was based on just two of the six species in the UK). 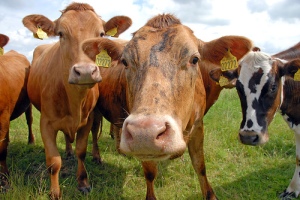 Time for a change? (Credit: http://www.eatdrinkbetter.com)

Deer are culled for conservation reasons, but the meat can still be sold as venison. As a local, wild alternative to intensely farmed livestock it seems an attractive option, particularly given the negative impacts of livestock farming on the environment. According to the UN’s Food and Agriculture Organisation (FAO), the livestock sector “emerges as one of the top two or three most serious contributors to the most serious environmental problems, at every scale from local to global” and is responsible for 18% of global greenhouse gas emissions. It seems that switching to wild sources of protein could provide a solution to two problems at once; the environmental impacts of intensive farming are eased, and the problems created by inflated deer populations are reduced. Perhaps wild meat could not meet demand, but it could at least reduce the pressure.

After further research, however, it seems that demand itself may be the problem. Demand for venison already outstrips supply and, not only do we farm venison, but over 1000 tonnes per year are imported from Northern Europe and New Zealand. Rather than providing a wild, ‘local’ alternative, the industry falls under the same pressures as its intensive counterparts and, to meet demands, production appears to be heading in a similar direction. Perhaps the proposed increase in culling rates will be welcomed in more ways than one. 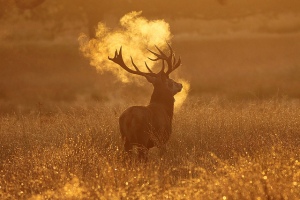 There are also other environmental issues to consider. Deer consume a vast amount of vegetation, and the nutrients taken from the environment during this process return to the hillsides when the animal dies, a cycle which is disrupted if the carcass is removed. If the full suggested quota of 750,000 deer are removed per year there is potential for large scale environmental impacts that have yet to be fully examined. Of course, if populations are brought under control, this mass culling and subsequent nutrient removal would only be short term – but then, so would the source of venison…

So, if demand is the problem, are there other alternatives? Perhaps non-native European Rabbits and Grey Squirrels could be contenders. Rabbits are another culprit of overgrazing (of both wild and cultivated crops) costing £260m in damaged crops and infrastructure each year. Grey squirrels cause severe destruction to woodlands by bark stripping, not to mention their effect on the native Red Squirrel.  No wonder the likes of Hugh Fernley-Whittingstall promotes their use, essentially solving two conservation issues with one swing of the butchers knife. 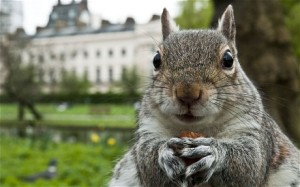 But why stop there? A report by the Commonwealth Agricultural Bureaux (CABI) estimated the total annual cost of invasive non-native species control in Britain at £1.7 billion in 2010. No doubt the figure has increased since then, so perhaps we need to change our perspective. If these species are seen as food, at least part of the cost of control could be offset and control measures themselves could gain support and success. Wallaby burger anyone?

Perhaps it stretches the imagination too far to expect wild meat to become a mainstay, but the planets resources are few and there are a lot of mouths to feed. There are clearly issues to consider, with demand at the top of the list, but it seems crazy to continue to intensify farming practices to the detriment of the environment and ignore the resources that are, literally, on our doorstep.

One Comment on “With so many people to feed, should we go back to the wild?”