The wind energy sector is growing rapidly worldwide. Although great from a renewable energy perspective, many studies have shown that large scale wind farms can have significant adverse effects on wildlife, in particular bird and bats. Although a more recent development compared to wind farms, small wind turbines (SWTs) are becoming increasingly popular. SWTs, also called microturbines or domestic wind turbines, in the UK are usually less than 25m in height and generate up to 15 kW of power. By contrast to large wind farms, effects of SWTs on wildlife have not been studied and are likely to be different due to their potential siting in a wider range of habitats.

Broadly, the aim of this project is to better understand the effects that SWTs have on birds and bats, and how they may be mitigated. To achieve these aims, we use a multidisciplinary approach including field studies, experiments, questionnaires of owners and planning officers, and public attitude surveys using choice experiments.

Since 2010, we have collected data on bird- and bat activity, collision mortality, and habitat availability in a wide range of SWT sites in both England and Scotland. Studied sites range from urban to rural, from very small building-mounted SWTs to larger models, and from single to multiple turbine installations. We use Vantage Point (VP) observations to record flight activity of birds, and static automatic bat detectors (SM2 BAT+ detectors and Anabats) to record bat activity. In 2013, we started looking at effects on a landscape-level and for multiple turbine installations, using hand-held detectors and breeding bird survey techniques along transects. 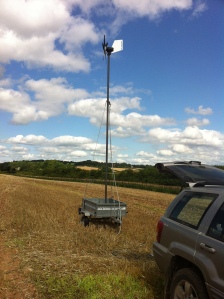 In 2010, we used an experimental approach to separately test the effects of SWT proximity and operation. We asked turbine owners to manually stop their turbines for periods of time during data collection. We found that although SWT operation decreases bat activity in their immediate vicinity, this effect diminishes at longer distances, and we found no evidence for a similar effect in birds. Read the published paper here, the lay summary, some news coverage here, or listen to a BBC Radio Scotland interview with Kirsty.

Following up these findings, in 2012 and 2013 we ran field experiments at sites in Dorset, specifically focusing on the effect of SWT installation and operation at different distances from linear habitat features (hedgerows). This work should further develop the evidence base to inform micro-siting decisions. The data are currently being analysed and will be written up over the next year.

3. Questionnaires of owners and planning officers

There currently is no centralised system or database that holds information on current SWT installations, making assessment of likely impacts as well as improvement of siting decisions difficult. To collate information on the location, type and setting of SWTs in the UK, we have made extensive use of questionnaire surveys, both of turbine owners and planning officers. We have also used this approach to provide first estimates of the likely extent of collision mortality (combined with our own records, this work is currently in preparation). This work is ongoing – if you are a current or prospective SWT owner, we would be very grateful to hear from you. Download the questionnaire here.

Moreover, we have used similar surveys to quantify what criteria planning officers typically use to decide on planning applications for SWTs and how such decisions vary across the country. Read more about this here.

In 2012 and 2013 we conducted a UK wide postal survey to explore public attitudes towards SWTs. This survey quantifies acceptance of SWTs in different types of location and investigates factors which influence this acceptance including belief in climate change, familiarity with SWTs and concerns about possible impacts. The data are currently being written up.

To investigate public attitudes specifically towards potential wildlife impacts of SWTs we use a choice experiment approach, as commonly used in economics. This approach allows quantification of the public’s willingness to pay for measures that reduce the impacts to determine their priorities for mitigation and planning guidance. Initially we are focussing this research on farmers, a section of the public who are most likely to own SWTs.  We are currently in the process of collecting data for this and are actively looking for volunteers and participants. If interested, please contact Cerian.

2 Comments on “Birds, bats and microturbines”