Pesticide-related confusion in pollinators and politicians

“I arrived confused about this topic and I will leave as confused as ever.” This was the parting comment from the only MP in the room and not the outcome we were hoping for! The event was a scientific briefing about neonicotinoid pesticides and pollinators, organised by the Soil Association in a classy venue in Westminster. Unfortunately, such confusion seems typical of the political response to an issue that has generated passionate controversy in many other sections of society. 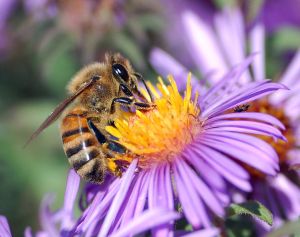 This particular event included me, Professor Dave Goulson from the University of Sussex and Dr Lynn Dicks from the University of Cambridge speaking on a panel, outlining recent advances in scientific evidence. Our presentations were followed by a response from Dr Peter Campbell from Syngenta, one of the main manufacturers of neonicotinoids, in an attempt to offer a balanced overview of opposing opinions. Leaving aside the questionable notion of balancing independent science against a company’s desire to protect their highly profitable products, the debate did raise some important and interesting issues.

For those who have not been following the controversy about neonicotinoids I will give a brief summary. Neonicotinoids, or ‘neonics’, are a relatively new class of pesticide that were introduced in the early 1990s. They have since become the most widely used insecticides in the world, with global sales of billions of $US. They are potent neurotoxins and are highly toxic to invertebrates at extremely low doses. They are now routinely applied on all major crops and, because they are systemic, they spread throughout plants’ tissues, offering the potential for complete protection from pest insects.

However, because neonics are so ubiquitous and effective, they may have very serious consequences for non-pest species as well, particularly insect pollinators that play crucial roles in natural systems and agriculture. Concerns were first voiced soon after their introduction, and by 2012 considerable evidence had mounted suggesting that they were having serious detrimental impacts on important pollinators – particularly honeybees and bumblebees. Indeed, a study that we carried out here at Stirling University demonstrated that field realistic, sub-lethal doses of the neonic imidacloprid resulted in an 85% reduction of reproductive success in bumblebees1. This size of effect obviously has massive implications for the long term persistence of populations.

The accumulation of dramatic evidence of this kind caught the attention of environmental organisations, the public and, eventually, politicians. The European Food Safety Authority (EFSA) spent six months evaluating all available research and concluded that neonics pose an unacceptable risk to bees.  By April 2013 the EU member states voted for a temporary ban on the use of three neonics on crops that are attractive to bees (the UK government voted against this ban – although just last week, the National Farmers Union’s application for ‘emergency’ use of neonics on oil seed rape was rejected by ministers). These restrictions will stay in place until the European Commission decides to change them and new evidence is currently being reviewed.

However, despite this widespread and well-justified concern, the confusion expressed by the MP at our briefing remains all too common in political circles (perhaps encouraged by the well-funded responses of the chemical industry to each new piece of evidence).

The relevance of lab-based experiments ‘in the field’

A frequent criticism of studies of neonics is that they haven’t been entirely carried out in the field, so making them of questionable relevance in real agricultural settings. We do know from lab-based and partially field-based studies that neonics reduce learning and memory in bees, impair their communication, foraging efficiency and immune systems and, crucially, reduce the pollination services that they can provide. But it’s been argued that exposure in the field isn’t sufficient to cause these effects, even though these studies used field-realistic doses of pesticides and were very well replicated. Early attempts at field studies did not always get the same results because they were poorly replicated and could not eliminate the many other factors that have an effect in the field; in these cases, it is not surprising that cause and effect are not always proven.

Nevertheless, a large nail in the coffin of the field-relevance objection came last year, in the form of a landmark study carried out in Sweden2. The experiment was quite an undertaking – a very large scale, well replicated field trial. This showed that oil seed rape fields treated with a neonic supported fewer wild bees and fewer nests of a solitary bee species. Bumblebee colony growth and reproduction was also significantly decreased, to an extent that closely mirrored the results we found here at Stirling. No effect was apparent on honeybee colony strength, perhaps because honeybee colonies are so much larger (in this experiment the bumblebee colonies started with approximately 50 workers while the honeybee colonies had over 3,400), which enables them to buffer against some stressors. In any case, it can be concluded from this experiment that, yes, neonics do have serious implications for wild bee populations in agricultural landscapes. 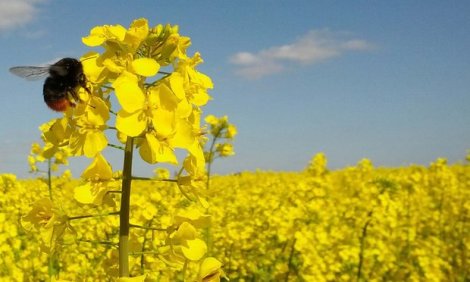 Wider contamination of the environment

Neonicotinoids were initially lauded as highly targeted chemicals but recent research has found that the majority of neonics are not actually taken up into crop plants – a staggering 94% leaches into soils and streams, contaminating a large variety of wild flowers growing in field margins3. In some cases neonic residues in field margin flowers are higher than in the crop itself, which to me illustrates the complexity of the system. Uptake by plants will depend on many different factors including soil type, water levels, weather and plant species, the interplay of which is not yet fully understood. These alarming discoveries have prompted yet more ‘confusion’ on the part of industry; at the briefing, Peter Campbell repeatedly referred to his inability to explain them, as if this somehow made the clear, repeated findings unbelievable. As one audience member noted, the natural response to these levels of contamination should surely be concern, irrespective of any (rather convenient) confusion.

And it is not just the pollinators at risk – neonics have been found to impact other beneficial species, such as parasitoid wasps (important natural enemies of many agricultural pests). According to a large review paper – the Worldwide Integrated Assessment on Systemic Pesticides4 – “a compelling body of evidence has accumulated that clearly demonstrates that the wide-scale use of these persistent, water-soluble chemicals is having widespread, chronic impacts upon global biodiversity and is likely to be having major negative effects on ecosystem services such as pollination that are vital to food security and sustainable development”.

So why the confusion and ongoing debate? Surely it’s clear that these chemicals should go the way of DDT? Well, one final argument has been that, whatever the damage caused by neonicotinoids, they are essential to maintain yields and support our farming systems. But the predicted crash in oil seed rape yields has not occurred – in fact the first EU-wide harvest since the ban showed an increase in yield.

It’s tempting – even essential – to note that it’s in the interests of the chemical companies that decision-makers should remain confused, and that clear findings should be made opaque. And it’s natural that farmers in particular, faced with warnings of major economic losses and crop failure, tend to be very cautious. But it really isn’t possible to hide behind the science anymore – the evidence is in and it is clear; neonics are causing massive harm to species that we all depend upon.

But to end on a more positive note – there really is a viable alternative to the blanket use of pesticides: Integrated Pest Management (IPM).  This is a much more sustainable approach to managing pests, combining biological, cultural and chemical methods to minimise environmental and economic risks. And there is plenty of evidence that it really works! It is now vital that our government invests more into research and progress in this field, enabling farmers to gain the knowledge and tools to maximise yields and minimise chemical inputs. There need be no confusion about it: this is the path to a more sustainable future.

3 Comments on “Pesticide-related confusion in pollinators and politicians”